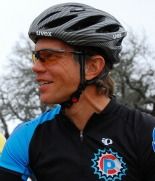 Joel an accomplished mountain bike and road racer, racing for over twenty years and competing in events such as the Trans Alp Challenge, La Ruta de los Conquistadores, the Leadville 100, Trans Andes Challenge, and also winning the two-man division of the 24-hrs of Adrenaline at the National Championships in 2001. Joel has also raced in the Tour of the Gila thirteen times with multiple top five GC finishes and individual stage wins. Prior to working as a race promoter, Joel devoted over 20 years to working with at risk youth. From 2001-2010, he was the executive director of a non-profit residential treatment program for at risk boys ages 13-17. Joel has served on the board of directors at Please BE KIND to Cyclist, The Friendship Alliance, an the Fieldstone Property Owner's Association. Joel is also a founding member of the Texas Off Road Multi Sport Association (TORMSA).